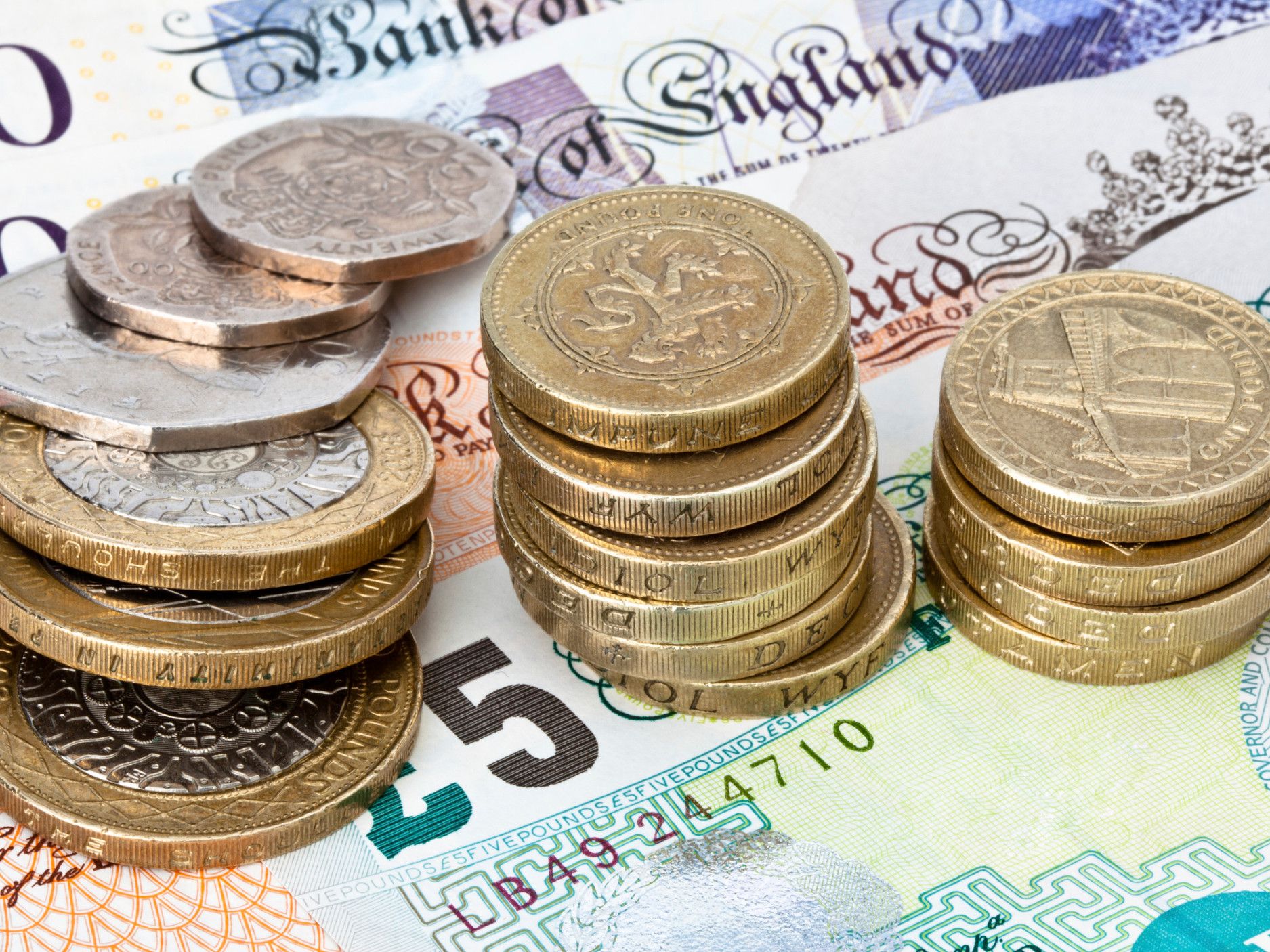 A list ranking 40 of the UK’s wealthiest former apprentices has been released. Their combined net worth is around £20 billion, with the personal fortune of the top five making up almost half that amount.

Commissioned by AAT, ahead of National Apprentice Week (9 to 13 March), it follows CEBR research showing apprenticeships are set to deliver over £100 billion to the UK economy by 2050.

The biggest growth is expected in the IT and telecoms sector, with a 110% increase estimated over the next 35 years. [1]

JCB Chairman, Lord Bamford, came top of the list (£3.15bn). Bamford started one of Britain’s most successful family-owned businesses. He started out as an apprentice at agricultural equipment firm Massey Ferguson.

In second place is Laurence Graff. He founded Graff Diamonds (£3bn) after becoming a jewellery apprentice at the age of 15.

Third on the list is entrepreneur, John Caudwell, who started Phones 4 U (£1.5bn) before selling it in 2006. His career began as an engineering apprentice at the Michelin factory in Stoke-on-Trent.

Some of more unusual entrants on the list include musician Eric Clapton (£150m). He completed an apprenticeship in stained glass design, before becoming one of the most celebrated guitarists of all time.

Rich rocker Ozzy Osbourne (£130m) was an apprentice toolmaker before making his fortune with Black Sabbath.

Other successful former apprentices that didn’t make the top 40, include: 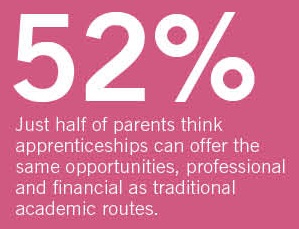 The Apprentice Rich List will come as a surprise to parents, who struggle to see the earning potential. Even though reports suggest people with an Advanced Level Apprenticeship earn on average £100,000 more, over the course of their career, than people without. [2]

According to a survey of 2,000 adults; 22% said they're not sure if they’d encourage their children to undertake an apprenticeship. 30% gave ‘low pay’ as the reason. This is a concern, as 40% of people said their parents had the biggest influence on their education and career. [3]

Just over half (52%) of parents think that apprenticeships can offer the same opportunities, professional and financial, as traditional routes - like university degrees.

According to research, the top three careers associated with apprenticeships were: 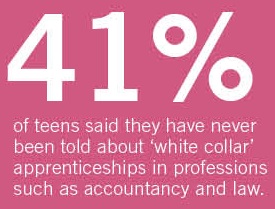 41% of teens said they were not aware of apprenticeships in professions such as accountancy and law. Yet, statistics show there were actually more opportunities in business, administration and law last year, than in any other sector. [4]

Sectors likely to see the biggest rise in apprenticeship numbers

AAT research has shown that the sectors likely to see the biggest rise in apprenticeship numbers by 2025 are not trades, but service professions. Industries projected to see some of the biggest rises: [5]

"The 2015 Apprenticeship Rich List shows not only that some of the country’s most successful individuals have come from an apprentice route, but that not all apprenticeships are in the industries you might expect. Many hail from other professional backgrounds, such as Sir Terry Matthews with a wealth of £1.19bn who was an apprentice researcher before founding tech firm Mitel. With accountancy apprenticeship opportunities set to rise by 42 per cent in the next 10 years, the formula for financial success does not always have to include university."

"There’s no doubting the importance of apprentices to the UK economy, with it set to gain £101 billion through apprentice recruitment by 2050. We’re hoping that by highlighting the success of these wealthy former apprentices we are also opening people’s eyes to what apprenticeships can deliver in terms of financial and career fulfilment."

"As today’s findings show, some of the country’s most successful entrepreneurs and public figures started out as apprentices."

"Apprenticeships make a vital contribution to our economy - they boost business productivity and give people the skills they need for a successful career. With more than two million starting apprenticeships since 2010, our reforms have seen more young people, parents, teachers and employers recognise the value of the opportunity to learn on the job."

Other examples of ex-apprentices who have gone on to high profile careers are: 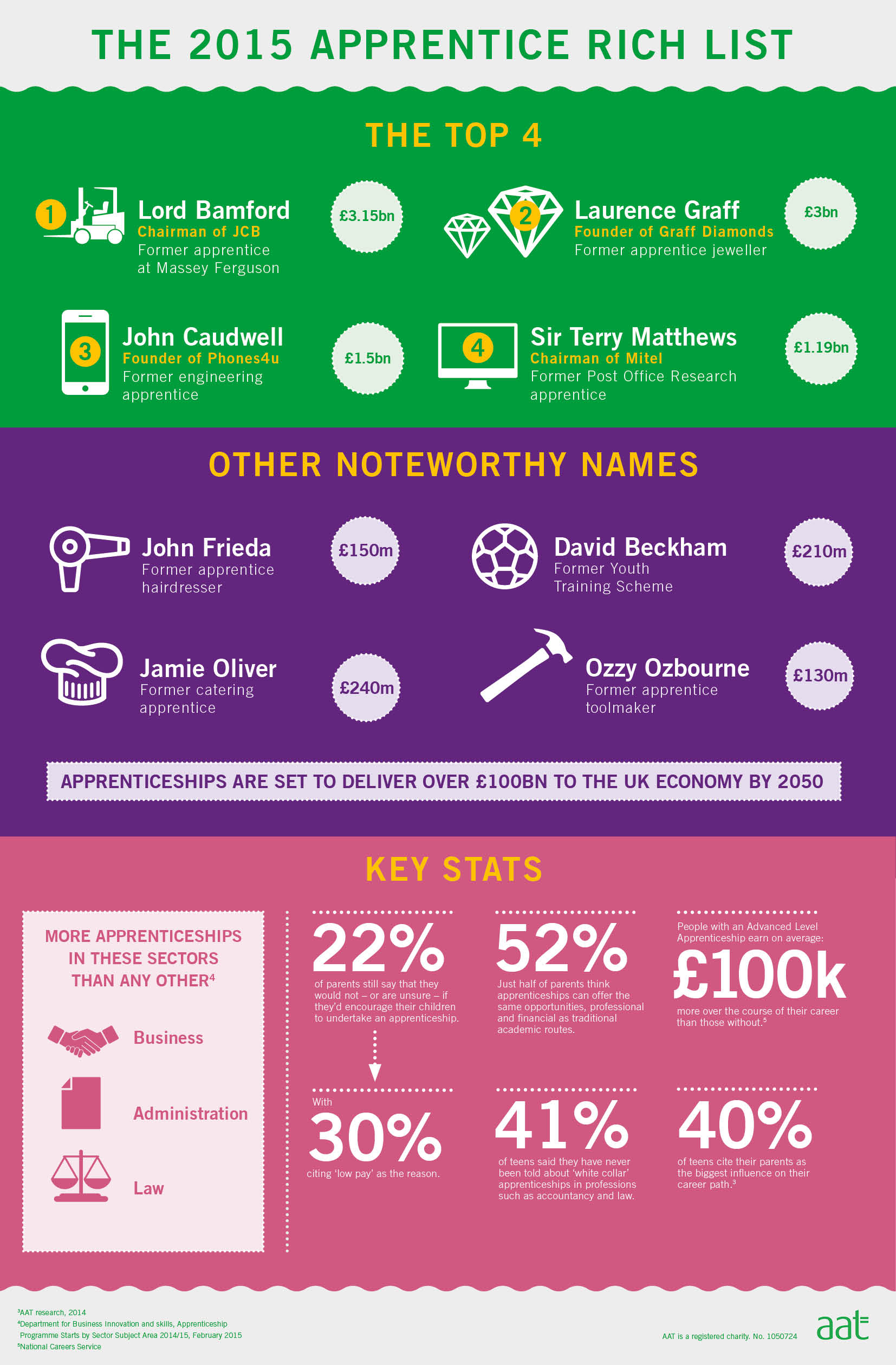